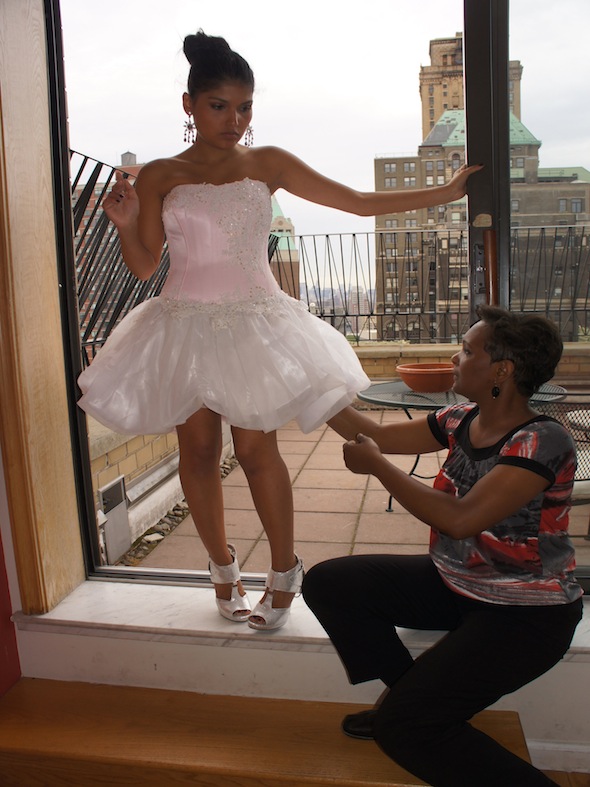 Jenn Cole helps a customer with her dress fitting. Cole hopes to launch her own clothing line in 2013.
Photo: provided by Jennifer Cole.

Almost all aspiring fashion designers have a story about what inspired them. Ralph Lauren started his empire by selling ties; Marc Jacobs says the cool women that he surrounded himself with inspired his patented vintage style. The story of 43-year-old Jennifer Cole’s march to Manhattan to become a big-time designer from the crime-ridden streets of Jackson, Mississippi starts with a $12 zipper. Cole left a business to tackle the mean fashion world of New York. It hasn’t been the smoothest transition, but through sheer determination she says she is well on her way.

Designing clothes was the farthest thing from Cole’s mind when she stumbled into a shop hoping to fix a zipper on her favorite suede skirt. She took the skirt into the alterations shop, where the employee behind the counter not only told her it would cost $12 to fix the zipper, but she would have to buy the zipper herself and bring it back to the shop. “I thought to myself, you must be crazy. I can do this myself and for much cheaper,” she said. “From that day on, the dream of becoming a factor in design grew.” Whether by luck or just being upset about the zipper, Cole says that day changed her life.

Growing up in a family of seven, Cole learned to sew from her mother when she was 12, and used those skills to make clothes for herself and the rest of the family. But after attending Alcorn State University in Lorman, Miss. for two years and working at odd jobs, including one at an electronics store in Jackson, she decided to go in new direction.

“At this point, I had not sewn anything in over 10 years, but I was amazed that I remembered everything, especially after the suede skirt mess,” said Cole. “None of those skills I had acquired before had left, so right then and there, I knew I had to do something with this talent.”

Cole, who prefers to be called Jenn, started a business called Jenn’s Bridal & Alterations, making bridal gowns and bridesmaids’ dresses to order out of her home. When things got too crowded, she moved into a building more suited to the demands of a growing clientele.

Castro Coleman, a gospel recording artist from Macomb, Miss., met Cole on a television program seven years ago, where Coleman was a guest and Cole was a producer. Coleman heard about Cole’s fashion sense and decided to see if she could make some outfits for him and his band mates. “What really drew me to her is when she said, ‘If you can dream it, then, I can make it,’” he recalled. “And, wow, she did.”

For 13 years, she designed everything from prom and wedding dresses to choir robes and sportswear. While running a full-time business and raising two sons, she also hosted a 30-minute television program called “New Beginnings.”

In 2007, now divorced, her two sons now teenagers, Cole expanded her business and renamed it New Beginnings Bridal & Formalwear, but she was at a crossroads in her career. She knew she wanted to go back to school, now it was just a matter of getting it done. She said the decision to pack up and move was fairly easy. “I knew I needed that piece of paper,” she said. “That degree that says not only do you have the talent but you have the academics to go along with it.”

Cole researched schools and decided to attend The Art Institute of New York City. Deciding to move to a totally unfamiliar city was fairly easy, but leaving everything behind, including a successful business, was something else. “I started telling people that I was thinking of shutting down my business and moving. All I got was crazy looks,” she said.

Although she had her mind made up about leaving, she said it was tough talking to her two grown sons, Kiera and Dominek, and having them realize they could achieve their own dreams. Kiera is working towards his bachelor’s in Sports Medicine at Mississippi College in Clinton, Miss. and Dominek is a sophomore at Hinds Community College in Jackson, Miss. studying business.

In the fall of 2010, she put up signs saying she was closing down the business in December. “My two boys knew this was my dream and they were old enough to take care of themselves,” she said. “As much as I love Mississippi, I had the feeling that I can be just as big as the famous designers. Nothing is going to stand in my way.”

Coleman said that even though he was sad to see her go, he understood.

“Mississippi wasn’t ready for Jenn Cole,” said Coleman, who praised her for treating the people she worked with like family. “Relationships are very important. She made her clients want to do more business. If she moves to Japan, I’m still going to use her and there are many more here in Mississippi feel that same way.”

Cole said she was struggling financially in Mississippi, even with her business, and when she moved she had only $3,000 to her name and a mind full of dreams. So Cole hopped on a plane for the first time in her life, and set out expecting to make some contacts about her design line, excel in school and wait for that one big break. “When I moved in the dorms last December, I knew it would be hard. I had family and friends that help me with things, so I am blessed to have those people in my life,” she said. Cole used her savings and financial aid to make it through the first year.

One role she did not expect to play was mentor, but at the Art Institute, younger students tend to follow her around like a puppy dog. But she finds herself advising those who are sometimes two decades younger than her.

“Jenn has helped me with school in this new life in the big city by being there when I needed someone to talk to,” said classmate Cordell Smith, 20. “I have no family here, but now I look at her as a good friend and family that knows about this fashion lifestyle. She had her own business for 13 years. So for her to come from that, all I can do is look up to her and hope one day I can do what she has.”

Cole’s plan for her second year was at first a casualty of family responsibility: She went back to Mississippi to tend to her mother after knee replacement surgery and did not get back to New York in time to register for classes. She now lives in Jersey City, N.J., works at a department store, and hopes to get back in school for the spring semester. To supplement her income, she created a website where she sells many of her designs. She plans a full launch of JennCole Designs in 2013.

“I admire her independence. She has done a lot and doesn’t rely on people to get the job done,” said 21-year-old classmate Jennifer Santos. “I appreciate that she takes me with her everywhere she goes in the fashion district. I look up to her, she’s not a bitter woman even with the tough times, and she is ready to give back.”

Regret is not a word in Cole’s vocabulary and because of an admitted stubbornness, she says she the transition from Jackson to New York took a while to get used to.

“I didn’t know a soul when I got here and that was scary,” Cole said. “But the people at school and around the city helped ease my nerves. The fashion and garment districts are mine for the taking, but I knew I had obstacles to get past being a black woman and trying to design in this industry. There aren’t too many of us out there.”